A keyless entry system is an electronic lock that controls access to a building or vehicle without using a traditional mechanical key. The term 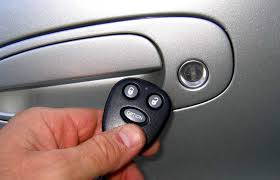 keyless entry system originally meant a lock controlled by a keypad located at or near the driver’s door, that required pressing a predetermined (or self-programmed) numeric code for entry. These systems, having evolved into a hidden touch-activated keypad, are still available on certain Ford or Lincoln models.

The term remote keyless system (RKS), also called keyless entry or remote central locking, refers to a lock that uses an electronic remote control as a key which is activated by a handheld device or automatically by proximity.

eyless remotes contain a short-range radio transmitter, and must be within a certain range, usually 5–20 meters (15–60 ft), of the car to work. When a button is pushed, it sends a coded signal by radio waves to a receiver unit in the car, which locks or unlocks the door. Most RKEs operate at a frequency of 315 MHz for North America-made cars and at 433.92 MHz for European, Japanese and Asian cars. Modern systems implement encryption to prevent car thieves from intercepting and spoofing the signal. Earlier systems used infrared instead of radio signals to unlock the vehicle, such as systems found on Mercedes-Benz,[3] BMW[4] and other manufacturers.

The system signals that it has either locked or unlocked the car usually through some fairly discreet combination of flashing vehicle lamps, a distinctive sound other than the horn, or some usage of the horn itself. A typical setup on cars is to have the horn or other sound chirp twice to signify that the car has been unlocked, and chirp once to indicate the car has been locked. For example, Toyota, Scion, and Lexus use a chirp system to signify the car being locked/unlocked. While two beeps means that driver’s door is unlocked, four beeps means all doors are unlocked. One long beep is for the trunk or power tailgate. One short beep signifies that the car is locked and alarm is set.

The functions of a remote keyless entry system are contained on a key fob or built into the ignition key handle itself. Buttons are dedicated to locking or unlocking the doors and opening the trunk or tailgate. On some minivans, the power sliding doors can be opened/closed remotely. Some cars will also close any open windows and roof when remotely locking the car. Some remote keyless fobs also feature a red panic button which activates the car alarm as a standard feature.

Some cars’ engines with remote keyless ignition systems can be started by the push of a button on the key fob.

On cars where the trunk release is electronically operated, it can be triggered to open by a button on the remote. Conventionally, the trunk springs open with the help ofhydraulic struts or torsion springs, and thereafter must be lowered manually. Premium models, such as SUVs and estates with tailgates, may have a motorized assist that can both open and close the tailgate for easy access and remote operation.

For offices, or residences, the system can also be coupled with the security system, garage door opener or remotely activated lighting devices.