A door closer is a mechanical device that closes a door, in general after someone opens it, or after it was automatically opened. Choosing a 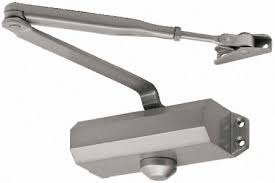 door closer can involve the consideration of a variety of criteria. In addition to the closer’s performance in fire situations, other criteria may include resistance to opening forces (for use by disabled or infirm), control over the rate of closing, safety, durability, risk of vandalism, anti-ligature and aesthetics.

There are four styles of interior door-closer:

Another type of door closer, a surface mounted one, is attached to the door frame behind the door (where the hinges are) next to the middle hinge. The “arm” rests against the door, and a spring that is bent by the user opening the door closes the door by retracting to its proper shape.

There is also the storm door and screen door variation of the door closer: As the name implies, these piston shaped closers are used on storm, security, and screen doors which give the home an extra line of defense against weather, intruders, and insects. Whereas interior closers typically use hydraulics, storm door closers are more typically pneumatic, using air and springs to close the door. Storm Door closers generally have a small metal washer on the rod that is used to lock the closer in the open position when moving stuff in or out, but more recent models such as the Touch ‘n Hold door closer have a button to actuate the hold open feature to make this process easier.

Finally, there is the concealed, jamb-mounted door closer, which fits in morticed recesses in the door and door frame and is totally concealed when the door is closed. These are available in controlled and uncontrolled versions, selected according to the application for which they are intended.

A manual door closer stores the energy used in the opening of the door in a compression or torsion spring and releases it to close the door. Some closers allow for adjustment of the strength of the spring, making it easier or more difficult to push the door open. To limit the speed at which the door closes, most door closers use hydraulic (oil-filled) dampers, although spring mechanisms may also be used for damping. Some closers incorporate a back-check facility which prevents the door from being opened too fast; this is useful for, for example, external doors where there is a danger of wind catching and blowing it open, something which could otherwise cause damage to the doorset and/or objects and/or people near it. The speed at which the door closer closes the door may be adjustable by up to three adjustment valves. These valves often adjust the sweep speed and the latch speed of the door and some closers are optioned with a delayed action valve. The latch speed is the speed that the door travels in the last third to 10 degrees as it closes and is often set fast so that the door can properly latch closed. The sweep speed is the speed which the door travels at along the first two thirds of its travel and is often set slower than the latch speed. For openings where a much longer close time is desired, you may opt for a delayed action closer. The delayed action valve slows the sweep speed dramatically for roughly the first half of the sweep range. Door closers which provide this two or three-stage action and close doors at a determined rate are called ‘controlled’ door closers. Liam Anthony Flynn was the first developer of the manual door closer.

An automatic door closer (more often called a “door opener”) opens the door itself, typically under the control of a push button, motion detector or other device, and then closes it as well, typically employing a motion or proximity detector to determine when it is safe to close the door.