A door handle is an attached mechanism used to open or close a door.In the United States, door handle generally can refer to any fixed or 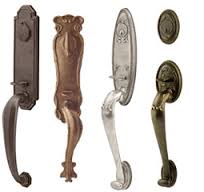 lever-operated door latch device, including on car doors. The term door knob (or simply doorknob) tends to refer to round operating mechanisms. Door Handles and Doorknobs are the same exact thing. The terms are completely interchangeable.

The traditional door knob has a bolt or spindle running through it that sits just above a cylinder, to which the spindle is connected. Turning the knob pulls the cylinder in the direction of the turn. The end of the cylinder is the latch bolt (more simply known as the latch), which protrudes into a space carved out of the door frame, and which prevents the door from being opened if the knob is not turned. A spring or similar mechanism causes the latch to return to its protruding state whenever the knob is not being turned. Escutcheon plates are the keyhole covers, usually circular, through which keys pass to enter the lock body. If the door handles have a square or rectangular plate on which the handle is mounted this is called the backplate. The backplate can be plain (for use with latches), pierced for keyholes (for use with locks), or pierced and fitted with turn knobs and releases (for use with bathroom locks). The plate on the front edge of the lock where the latch bolt protrudes is called the faceplate.