Padlocks are portable locks with a shackle that may be passed through an opening (such as a chain link, or hasp staple) to protect against 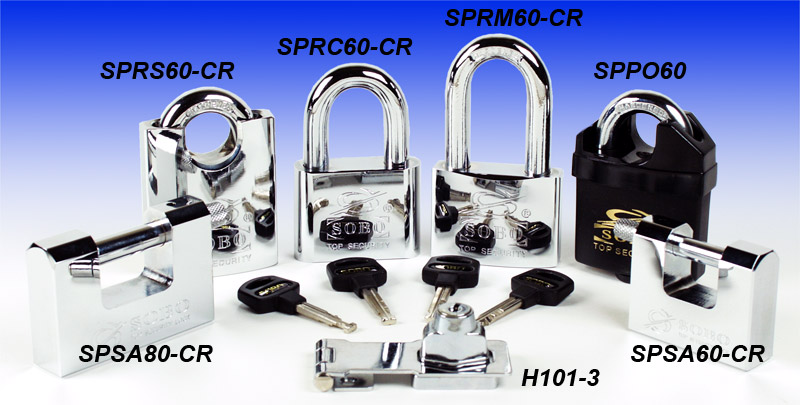 unauthorized use, theft, vandalism, or harm.

There are padlocks dating to the Roman Era, 500 BC – 300 AD. They were known in early times by merchants traveling the ancient trade routes to Asia and China.

Padlocks have been used in China since the late Eastern Han Dynasty (25–220 AD). According to Hong-Sen Yan, director of the National Science and Technology Museum, early Chinese padlocks were mainly “key-operated locks with splitting springs, and partially keyless letter combination locks”.Padlocks were made from bronze, brass, silver, and other materials. The use of bronze was more prevalent for the early Chinese padlocks.

Padlocks with spring tine mechanisms have been found in York, England, at the Jorvik Viking settlement, dated 850 AD. During this period between 850 AD and the early 1000 AD was when the name ‘padlock’ was coined. It was contrived during this period to initially hold livestock within its quarters of the paddock, whereby the word pad was derived and applied to form the current word.

Smokehouse locks, designed in England, were formed from wrought iron sheet and employed simple lever and ward mechanisms. These locks afforded little protection against forced and surreptitious entry. Contemporary with the smokehouse padlocks and originating in the Slavic areas of Europe, “screw key” padlocks opened with a helical key that was threaded into the keyhole. The key pulled the locking bolt open against a strong spring. Padlocks that offered more key variance were the demise of the screw lock. Improved manufacturing methods allowed the manufacture of better padlocks that put an end to the Smokehouse around 1910.

Around the middle of the 19th century, “Scandinavian” style locks, or “Polhem locks”, invented by the eponymous Swedish inventorChristopher Polhem, became a more secure alternative to the prevailing smokehouse and screw locks. These locks had a cast iron body that was loaded with a stack of rotating disks. Each disk had a central cutout to allow the key to pass through them and two notches cut out on the edge of the disc. When locked, the discs passed through cut-outs on the shackle. The key rotated each disk until the notches, placed along the edge of each tumbler in different places, lined up with the shackle, allowing the shackle to slide out of the body. TheMcWilliams company received a patent for these locks in 1871. The “Scandinavian” design was so successful that JHW Climax & Co. ofNewark, New Jersey continued to make these padlocks until the 1950s. Today, other countries are still manufacturing this style of padlock.

Contemporary with the Scandinavian padlock, were the “cast heart” locks, so called because of their shape. A significantly stronger lock than the smokehouse and much more resistant to corrosion than the Scandinavian, the hearts had a lock body sand cast from brass or bronze and a more secure lever mechanism. Heart locks had two prominent characteristics: one was a spring-loaded cover that pivoted over the keyhole to keep dirt and insects out of the lock that was called a “drop”. The other was a point formed at the bottom of the lock so a chain could be attached to the lock body to prevent the lock from getting lost or stolen. Cast heart locks were very popular withrailroads for locking switches and cars because of their economical cost and excellent ability to open reliably in dirty, moist, and frozen environments.

Around the 1870s, lock makers realized they could successfully package the same locking mechanism found in cast heart locks into a more economical steel or brass shell instead of having to cast a thick metal body. These lock shells were stamped out of flat metal stock, filled with lever tumblers, and then riveted together. Although more fragile than the cast hearts, these locks were attractive because they cost less. In 1908, Adams & Westlake patented a stamped & riveted switch lock that was so economical that many railroads stopped using the popular cast hearts and went with this new stamped shell lock body design. Many lock manufacturers made this very popular style of lock.